The Little Sisters Contraception Case: The Big Deal in Signing a Little Form 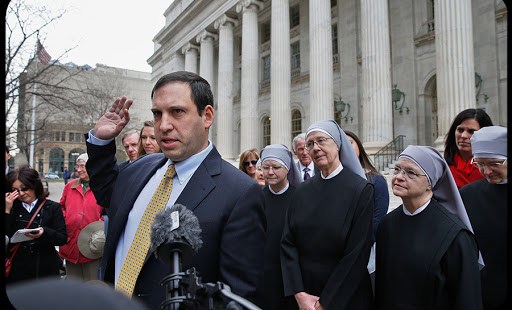 What the NY TImes sees as “hair-splitting,” the Sisters view as a violation of their faith

The Little Sisters of the Poor claim that the federal government has given them the “impossible choice of either violating the law or violating the faith.”

The federal government is saying, in response, “Don’t worry. All you have to do is sign a form or write a letter stating your objection. We’ll take care of the rest.”

And yet, the Sisters, and other non-profit religious groups, are still pursuing a class-action lawsuit against the US Department of Health and Human Services and insisting that it isn’t so simple as signing a form.

The religious order, which runs homes for the aged and infirm—and employs lay people in positions such as nurses and physical therapists, cooks, janitors and accountants—appealed their case to the US Supreme Court this week.

Perhaps no issue has been so contentious and has persisted so long in the five years since the signing of the Affordable Care Act—Obamacare—as the question people of faith and religious institutions are still pursuing: whether they can be forced to help pay for and facilitate the acquisition of contraceptives, abortifacients and sterilization by their employees.

Churches are exempt from the requirement that employers provide coverage for “preventive services” for women, including contraception, but religious non-profits, such as Catholic colleges, hospitals and nursing homes, are not. The Obama Administration has several times revised an accommodation allowing those non-profits to wash their hands of the requirement by filing a form stating their objection and providing the name of their insurer. Earlier this month, HHS issued yet another revision, allowing a religious institution to merely write a letter stating the objection.

But objectors insist that even writing such a letter would involve them in the mechanism to the point that they would be, according to Catholic moral theology, complicit in the provision of contraception.

In the first place, they say, signing a form or writing a letter would be a "trigger" that sets the process of providing contraceptives in motion.

“All the available compliance methods would make them morally complicit in grave sin,” said a brief submitted this week to the Supreme Court.

That brief, filed by the Becket Fund for Religious Liberty days after the US Court of Appeals for the 10th Circuit ruled against the Sisters, asked the high court to review the case.

“HHS refuses to give them the exemption it has given other religious employers, and instead requires them to comply, either directly or by executing documents that authorize and obligate others to use the Little Sisters’ healthcare plans to accomplish the ‘seamless’ provision of contraceptive coverage.”

The sticking point for the Sisters and others objecting to the HHS Mandate hinges on the concept known in Catholic moral theology as "formal and material cooperation." It’s not an easy concept for the general public to grasp.

Even bright legal minds such as the New York Times Supreme Court correspondent Linda Greenhouse find it to be like so much hair-splitting. She
wrote on Thursday:

The administration has bent over backward to accommodate religious claims that are by any measure extreme. The problem is that the religious groups pressing these claims refuse to take yes for an answer. Under pre-existing regulations that the Obama administration fine-tuned in the aftermath of the Hobby Lobby decision, all these organizations have to do to qualify for the exemption is to ask for it, by filling out a two-page form, or even more simply by sending a letter to the Department of Health and Human Services declaring that they have a religious objection to paying for birth control. At that point, their obligation ceases and the coverage has to be provided by the organizations’ insurance carrier or, in the case of a self-insured plan, by the third-party administrator, without any financial involvement by the organization.

Greenhouse noted that this year marks the 50th anniversary of Griswold v. Connecticut, a case in which the Supreme Court said there is a constitutional right to contraception. "At issue now is not only the right of women who happen to work for a religious employer to receive, on par with other women, a benefit the government deems an essential part of health care. At stake is the health of civil society in an increasingly diverse country," Greenhouse wrote. "Religious conflict is a worldwide problem that of course lies far outside the Supreme Court’s purview. But the court can do its part, as I believe it will, by labeling this anachronistic and politically driven dispute over birth control for what it is, a case too far."

But the Becket Fund brief filed this week noted that courts considering the challenges to the HHS mandate have misunderstood “the true nature of the religious objections.”


They are about whether HHS may force objecting religious employers to comply with a mandate to provide contraceptive coverage to their employees in a "seamless" way, by interjecting that coverage into the employer’s own "insurance coverage network" and utilizing the plan’s own "coverage administration infrastructure.”

The form or notice that HHS requires objecting employers to sign is essential to “ensure…that there is a party with legal authority” to make payments for contraceptive services, the brief points out  A third party administrator “would have no contractual authority to pay claims without it—or legal authority to either use plan information for that purpose or seek government reimbursement for doing so. It is that ‘gate-opening act’ of executing that instrument—not the independent actions of any third parties—that petitioners sincerely believe would violate their religious beliefs.”

In spite of the accommodation, the Becket Fund explains on its website, the law "still forces the Little Sisters to participate in providing access to the drugs…. The ‘accommodation’ still forces the Little Sisters to find an insurer who will cover sterilization, contraceptive and abortion-inducing drugs and devices, and will provide related counseling and education to promote those things."

A group of 67 theologians filed a
friend of the court brief in a case last year in which they explained the problem from a theological perspective. The Little Sisters, they said, “can reasonably conclude, based on the Catholic moral tradition, that compliance with the Mandate would involve them in ‘formal’ cooperation with wrongdoing, which is never permissible under Catholic doctrine.” The brief continues:


”Formal” cooperation in wrongdoing occurs when one commits an action that contributes to or assists another’s wrongful act, in such a way that the cooperator shares in the wrongful intention of the other actor. … The Little Sisters may reasonably conclude that, by obeying the Government’s directive to execute and deliver the Form, they would come to share in the Government’s intention to achieve the wrongful objectives of providing coverage for, and promoting the use of, abortifacients, contraceptives, and sterilization. … The Little Sisters may reasonably infer from the Catholic tradition that executing a form whose sole purpose is to designate and authorize another to perform a forbidden action would necessarily involve sharing in the intention to perform the action.