Forgive Me Kids, for I Have Sinned 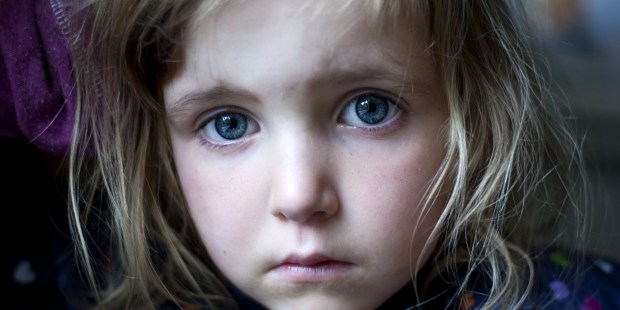 “I knew I was wrong. I never would have dared speak like that to an adult.”

I wish I had a rational explanation for my behavior that morning.

It would be easy to blame the teething toddler’s constant disruptions of my night’s sleep, or the fact that I opened my e-mail to realize I had missed an urgent request from my supervisor, or the nagging headache I had been nursing for days. But those sorts of things are routine occurrences in my chaotic mornings.

So there isn’t a rational explanation to explain away the fact that that morning I didn’t cry over spilled milk: I raged over it.

With no forewarning I was suddenly unleashing on anyone and anything in my path. You would have thought the sight of my cowering children would have in some way dissipated my anger, but it actually satisfied it. I relished the control and the escape from being patient, understanding, tolerant.

When I had finally exhausted myself, I looked around the room at the remnants of my outburst. Eight eyes stared back at me. All fearful and all full of tears. I was unmoved.

But as the day wore on, I couldn’t shake their expressions.

In doing an examination of conscience as I lay in bed that evening, I tried unsuccessfully to rationalize the incident. I still made excuses for my outburst, even as it persistently tugged at my conscience. But truth be told, the catalyst to my losing my mind wasn’t my children. It was my own carelessness in attempting to recap the milk.

I knew I was wrong. I never would have dared speak like that to any adult. Honestly, I never have. Even more so, had I lost my cool like that with a friend, or for that matter, even a stranger, I would apologize. And in a case like this, where my transgression was so extreme, my apology would likely be accompanied by flowers or a gift card.

Why was it different for my children? Wasn’t my sin against them just as bad as if it was against another person? No, wasn’t it worse?  Here God had entrusted me to love, care, shape and mold these little human beings into loving and faithful individuals.

Ugh. But who wants to apologize to a child?

And anyway, I’d stuffed them with their favorite culinary delights all day, so I was pretty sure they knew I was sorry and all was forgiven.

But the fact remains: to require my children to ask for forgiveness when they do something wrong is meaningless if I can’t extend the same to them when I have wronged them.

My children see me go to confession. They understand that the reason that I go is because I have done something wrong and that I need to ask God to forgive me. They have watched my husband and me reconcile after arguments and heard us ask each other for forgiveness.

By failing to provide my children with the same experience of reconciliation, what do I communicate to them?

There must be reparation for sin, all sin, regardless of who has been wronged. And this simple message reiterates the fundamental tenet of Christianity: we are all God’s children and are all deserving of dignity and respect.

So I called each of my children to me, one by one, and asked for their forgiveness. I told them what I did, why it was wrong and promised I would try hard not to do it again.

While the older two forgave me instantly and with enthusiasm, the younger ones were a little harder to read. I guess for now I’ll have to assume that in baby language, an ear pull means, “I accept your apology.” Likewise, I’m pretty sure that by offering me a stint with his prized Obi-wan Kenobi, my three-year-old was letting me know all was forgiven.

And in that moment, milk safely in the fridge, all was right in the world.

Maria Garabis Davis holds a Juris Doctor degree and a BA in theology. A former youth minister and now practicing attorney, she resides in Columbus, Ohio, with her husband and four children.