Let us sing out loud to the Lord! 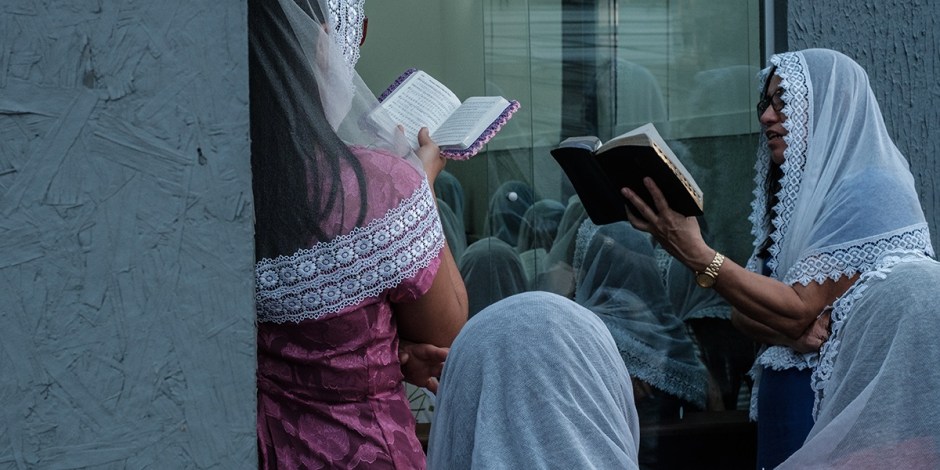 RIO DE JANEIRO – MARCH 25, 2017: Members of a Christian congregation in Brazil sing a hymn outside of their overcrowded church at Complexo do Alemao community (favela) in Rio de Janeiro, Brazil.

Complexo do Alemão (German’s Complex) was bought by a Polish man named Leonard Kaczmarkiewicz, shortly after World War I. In the 1920s a leather factory brought many people to the area looking for jobs. By 1946, Complexo do Alemao had developed into the main industrial pole of Rio. Kaczmarkiewicz divided his land and sold it in plots in 1951, which were quickly developed into favelas (low income urban housing).

Complexo do Alemao is home to just shy of 70,000 people in a tiny 1.17-square-mile area. This leads to desperately overcrowded housing and causes facilities, such as the church pictured here, to exceed capacity during services. The women pictured, undeterred, sing their hymns loud enough to be heard through the glass.

Psalm 95
Come, let’s sing out loud to the Lord!
Let’s raise a joyful shout to the rock of our salvation!
Let’s come before him with thanks!
Let’s shout songs of joy to him!
The Lord is a great God,
the great king over all other gods.
The earth’s depths are in his hands;
the mountain heights belong to him;
the sea, which he made, is his
along with the dry ground,
which his own hands formed.
Come, let’s worship and bow down!
Let’s kneel before the Lord, our maker!
He is our God,
and we are the people of his pasture,
the sheep in his hands.
If only you would listen to his voice right now!
“Don’t harden your hearts
like you did at Meribah,
like you did when you were at Massah,
in the wilderness,
when your ancestors tested me
and scrutinized me,
even though they had already seen my acts.
For forty years I despised that generation;
I said, ‘These people have twisted hearts.
They don’t know my ways.’
So in anger I swore:
‘They will never enter my place of rest!’”

Tags:
BrazilCatholicismPhoto of the Day
Daily prayer
Aleteia's Top 10
See More
Advertising
Newsletter
Get Aleteia delivered to your inbox. Subscribe here.
Thank you! Your submission has been received!