3 Easy ways to get your kids involved in saving electricity 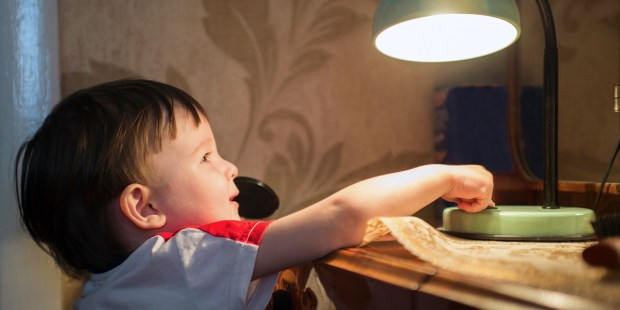 With these tricks, you won’t have to spend your summer nagging your kids to turn off the lights.

For most of us, temperature isn’t the only thing spiking as summer rolls on. Those 10 degrees between 90 and 100 mean a sharp incline in the electric bill — which is already taking a hit from kids being home all day. But there are some simple steps you can take to keep the bill under control, and best of all … they’re kid-friendly, so the whole family can get involved.

1
Designate Lights Out Hero of the Day

Oh, the lights. Left on in every room, every bathroom, every closet, even ridiculous lights like the one in the entryway that doesn’t illuminate anything — somehow my kids find a way to flip every switch in the house on and walk away, as if they’ve never heard of turning the lights off. This is a double problem now that we’re living in a split-level, because the lights left on upstairs go unnoticed until I happen to go up there. And as all parents know, reminding the kids to turn the lights off doesn’t always work. Ditto with punishment for lights left on — kids just don’t think about it. It’s not on their radar.

Which is why the best way to solve the problem is to put it on their radar. Instead of constantly nagging or punishing, create the “Lights Out Hero of the Day.” When you notice one child in particularly being careful to turn out the lights, name them the lights out hero. They get to go first in everything — first choice of movies, first to pick a story, first to choose lunch or dessert. Most importantly, they get to pick the bedtime story and say the bedtime prayers. I promise, your kids will magically transform into electricity-saving ninjas — and interestingly enough, you might find that their prayers become more thoughtful (and more lengthy).

2
Designate a keeper of the doors

We’ve been struggling a little with the a/c upstairs. One room is freezing, while the other two rooms and the gameroom are easily 10 degrees cooler. We spent a month or two trying to figure out if there was a problem with the vents or the wiring before we realized that the cold air going into those rooms was basically just working overtime trying to cool the open stairways. When we finally started closing all the doors, the temperature evened out.

The tricky part, as with the lights, was getting the kids to help. I didn’t want to detract from the wild success of “light hero,” so instead I pick one each morning to be the “keeper of the doors.” They’re responsible for any doors that are inadvertently left open — and they’re allowed to tell me if they see their sibling walk through a door without closing it, which earns the offender five minutes off their screen time. This is basically my children’s dream come true — responsibility plus permission to tattle? What could go wrong? (Spoiler: a lot. But the doors stay closed.)

Wait up, this isn’t what it sounds like. Well it is, but not entirely. After my kids are done swimming in the afternoons, I like to maximize our time by washing their hair right in the backyard. I grab the hose, the “pool” shampoo, and the kids and wash all the chlorine out of their hair. As originally conceived, this was an attempt to avoid rotating multiple children out of multiple showers and baths, and it does indeed do a fantastic job of that. But the side effect of taking the hot water heater pressure off your electric bill is a pretty sweet bonus. Plus, when the temperature really soars in mid-August, the water from the hose will be so warm your kids won’t even be able to tell the difference.

Obviously, all of these will have to be tailored for your family and your particular dynamics. It’s a good idea to have a family discussion before they’re implemented, so the kids understand the importance of working together as a family to take care of what we’ve been given.

Read more:
How to help your kids memorize Scripture

Read more:
10 Summertime manners to teach your kids so everyone can relax