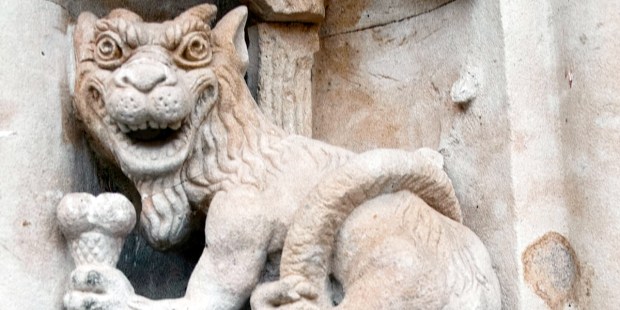 Just as medieval masons drew inspiration from the bestiary they had at hand, contemporary artists blend tradition and pop culture to convey the same eternal message.

A gargoyle, technically speaking, is but the protruding part of a pipe that serves to deflect water that would otherwise accumulate on a roof. Whereas we immediately associate them to medieval architecture, gargoyles are by no means a medieval invention: Egyptians already included them as a construction element, to prevent moisture from destroying their ceilings.

But, practical as they are, some historians point out that the use of gargoyles and grotesques in cathedrals also has a clear, straightforward pedagogical function: these fantastic creatures reinforce the notion that evil remains outside the church, metaphorically and literally, and that evil flees from holy places.

But the ways in which we depict evil change throughout the years. So, it should not be that surprising that in some contemporary cathedrals we find gargoyles depicting some of the better-known representations of evil of our day and age. Some sculptors have included Darth Vader, the former Jedi who decided to surrender to the dark side, as a gargoyle. Just as medieval masons drew inspiration from the bestiary they had at hand (mostly inherited from Greek mythology) to decorate the façades of basilicas and cathedrals they worked on, contemporary artists and restorers do the same thing, blending tradition and pop culture to convey the same message.

However, not all grotesques and gargoyles necessarily represent evil. Some more innocent motifs have been and can be used in these intricate designs. On the façade of the magnificent cathedral of Salamanca, one finds both an astronaut and what appears to be a faun, or a demon, casually enjoying an ice cream cone: these figures were included in the façade of the “new” cathedral, back in 1992, as part of an artistic project called “the ages of man,” which incorporated some contemporary motifs in the building. Some say this faun represents the often-mischievous students from Salamanca University!