Soon to be Blessed Francis Mary Jordan: He heard God’s call gazing on the cedars of Lebanon 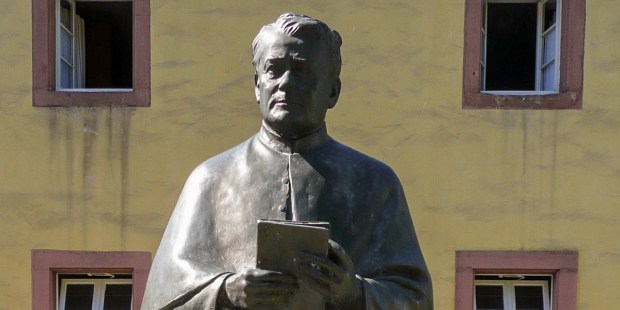 Aleteia’s daily saint profiles are prepared by a spiritual son of this holy man.

In 1880, a young German priest was studying languages in Egypt and Palestine. During the trip, this unassuming but gifted man visited the various shrines and holy places associated with the lives of Jesus and his mother, and it was during those weeks and months that a new facet of his vocation began to take shape.

When the priest—Father Johann Baptist Jordan—visited Lebanon, it was there, standing on a mountain, looking out over the vista and the celebrated cedars of Lebanon (see Jeremiah 22:7; Psalm 29:5), that he had a profound religious experience that marked the beginning of a new chapter in his life. An account of this event, written years later by one of Father Jordan’s closest friends and collaborators, would recall that, as the priest

had passed his eyes over the Holy Land and viewed the ever present religious needs, the word of the Savior had come to his mind clearer than ever before: “Eternal life is this: to know you, the only true God, and Him whom you have sent, Jesus Christ” (John 17:3).

Father Jordan would himself recall: “In Lebanon I had the impression that the planned foundation would come to life.”

His time in Lebanon began to bear fruit when, on December 8, 1881, in the small chapel of St. Bridget in the Casa di Santa Brigida in Rome, Father Jordan and two companions professed private vows of poverty, chastity, and obedience, establishing a new family of professed religious and committed lay people, originally called the Catholic Teaching Society.

Father Jordan would himself come to be known by a new religious name that embodied his values and spirituality—Francis Mary of the Cross—and the communities he founded would come to be known simply as Salvatorians.

Since Father Jordan’s death in Switzerland in 1918, the family of Salvatorian priests, brothers, sisters, and lay members has long honored the holiness and witness of Father Jordan, seeking to live out his desire that Salvatorians act as “apostles for our times” and “diligently and wisely use all ways and means which the love of Christ inspires to glorify God.”

Pope Benedict XVI recognized his heroic virtues in 2011, granting him the title “Venerable.” On June 19, 2020, the Solemnity of the Most Sacred Heart of Jesus, Pope Francis formally approved a miracle attributed to the intercession of Father Jordan, clearing the way for his beatification.

This man is now known throughout the world simply as “Father Jordan.” Born in Gurtweil, Germany, in 1848, and brought up in a poor family, John Baptist was not at first able to realize his dream of becoming a priest, although he had become aware of his vocation at the time of his First Communion. After finishing primary school, he worked as a laborer and journeyman. In his travels from town to town, he came to recognize that there were many forces that drew people away from God and the Church. The situation was further complicated because of the harsh limits placed on the Catholic Church in Germany by the state-sanctioned Kulturkampf.

All these experiences made Jordan’s faith stronger and he became more certain of his vocation to the priesthood. Once he was finally able to begin his seminary studies, he demonstrated a proficiency in languages, a gift that would serve him well in his future ministries of writing and administration of the fledgling Society. It was also during this period of his life that Father began writing his spiritual diary. These texts remain an invaluable source of knowledge about Jordan’s personality and spirituality.

Following his profession of vows in 1881, Father Jordan devoted himself to the work of building up the Society as its founder, spiritual guide, and superior general. Holding these multiple responsibilities was not easy for him, particularly as the young communities faced administrative and financial crises. However, in these experiences he was also able to discover a profound sense of peace and joy, flowing from his unshakable trust in God’s Providence and his conviction that he was fulfilling a special mission entrusted to him by God.

In collaboration with the Baroness Therese von Wüllenweber (now honored as Blessed Mary of the Apostles, co-founder of the Sisters of the Divine Savior), the Servant of God Bonaventure Lüthen, and Servant of God Pancratius Pfeiffer, Father Jordan saw the educational, healthcare, publishing, and pastoral outreach of the Salvatorians spread throughout Europe, the United States, and South America.

A pivotal moment for the missionary efforts of the Salvatorians was the missioning of Father Otto Hofpenmüller and a small group of missionary companions to the region of Assam, India, in 1890.

Throughout all these experiences, Father Jordan continued to grow and mature as one who made the Will of God the touchpoint of his life in all things. Although he urged his Salvatorian sons and daughters to always be actively engaged in ministry and the apostolate, always proclaiming the loving kindness of the Divine Savior, his talks and writings—especially the Spiritual Diary—reveal him to have been a man of deep faith with a contemplative heart. The foundation of his spirituality was his deep love for God and neighbor, his perseverance in prayer, his trust in Providence, as well as his humility, love for the Eucharist, courageous embrace of the cross, and fidelity to the Church.

Because of the anti-German sentiment in Italy during the First World War, Father Jordan was effectively exiled from Rome and the Salvatorian motherhouse near Vatican City for the final years of his life. At the time of his death in Tafers, Switzerland, on September 8, 1918, he was mourned by the Salvatorians throughout the world, as well as by many who had been touched by his words and presence.

An early account of his life records these words, written by one of the Daughters of Charity who cared for him in the weeks before his death:

Gradually the patients of the hospital also came in, mostly poor, old, infirm people; who in great part hobbled along with walking sticks. One could not help thinking of the Savior’s words: ‘Call the poor, the maimed, the lame and blind, and thou shalt be blessed.’

Father Jordan’s life and ministry was marked by an expansive spirit of universality and inclusivity, realized in a mystical way in the mountains of Lebanon. His vision of what the Church could and should be was based on the conviction that every Christian, regardless of their state of life, was called to proclaim the Gospel in their own time and place.

Anticipating what we now think of as the Universal Call to Holiness and the New Evangelization, Father Jordan is truly an Apostle of the Divine Savior, inviting all others to come to know “the one true God” and Jesus Christ, whom he has sent.

Read more:
Saved from and saved for — what it means to have a Savior