‘For all that you have done, suffered, and given me’: Benedict’s farewell to his brother 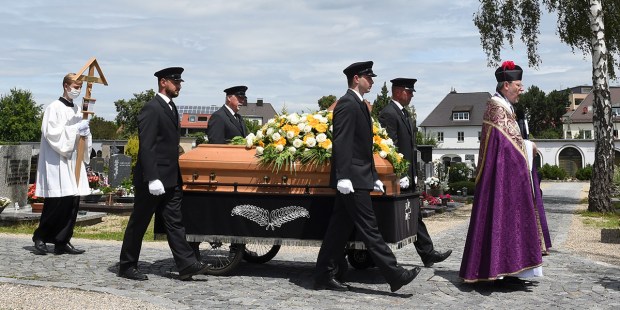 The funeral of Monsignor Georg Ratzinger, the elder brother of Pope Emeritus Benedict XVI, was held on Wednesday at the Cathedral of Saint Peter in Regensburg, Germany.

The emeritus pope was not able to attend, however his longtime secretary, Archbishop Georg Gänswein, did attend and concelebrated the Mass. Archbishop Gänswein read a letter from Benedict XVI at the conclusion of the Mass, stopping several times to contain his emotion before being able to continue reading.

“At this hour when you offer my brother the final brotherly service and guide him on his final earthly path, I am with you,” the Pope Emeritus assured in his letter, dated July 7.

Benedict recalled the visit to Georg he made just days ago, saying that when he said “goodbye” to his brother on June 22, he “knew it would be a farewell from this world forever.” Yet he expressed surety in the fact that “the good Lord, who has given us this union in this world, reigns in the other world and will give us a new union.”

“In the end, I would like to thank him for allowing me to be with him again in the last days of his life,” he wrote. “He did not ask me to visit him. But I felt it was time to go see him again. I am deeply grateful for this inner sign that the Lord has given me.”

Pope Emeritus Benedict XVI concluded his note with words of thanks: “May God reward you, dear Georg, for all that you have done, suffered and given me.”

You can watch the funeral here. The archbishop reading Benedict’s letter starts at approximately 2:02:30.

Monsignor Ratzinger died at the age of 96 on July 1 after being hospitalized in Regensburg, the city where he lived the greater part of his life.

Pope Francis sent a personal note of condolences to his predecessor, assuring the Pope Emeritus of his prayers both for his brother and for Benedict himself.

The two brothers were ordained together on June 29, 1951. They had one other sibling, a sister, Maria, who never married and assisted the future pope with his household.

Benedict’s letter noted that people “from many countries, social and professional backgrounds” had written to him in a way that touched his heart.

Lamenting his inability to reply to each one of them personally, he nonetheless thanked them for accompanying him at this time. He also thanked all those who have been with his late brother “visibly and invisibly” during these past weeks.

“The echo of his life and work, which I have received in these days in the form of letters, telegrams and emails, goes far beyond what I could have imagined,” he wrote, adding that Cardinal Newman’s motto “cor ad cor loquitur” — heart speaks to heart — has become true for him, as hearts speak to each other beyond words on paper.

Pope Emeritus Benedict XVI wrote that three characteristics came up in his recollections about his brother.

The first – he said – is that his brother “received and understood his vocation to the priesthood as a musical vocation at the same time.”

He recalled that already in the early years of his elder brother’s life at Tittmoning, Georg took the personal initiative to train himself thoroughly in music. These studies led him to become the Kapellmeister of Regensburg Cathedral and guide of the Regensburger Domspatzen (the Regensburg Cathedral choir) – a title which Georg would not have accepted – the Pope Emeritus said, if their mother had not died shortly beforehand.

The Pope Emeritus recalled that their mother died around the same time as Kapellmeister Schrems, the predecessor of Georg Ratzinger, as director.

He remarked that this service became “more and more of a joy” for his late brother, adding however that “hostility and rejection were not lacking, especially in the beginning.” At the same time, he noted that his brother became a father figure to the many young people who worked with him in the choir.

“My heartfelt thanks also go to all of them at this hour when I was allowed to experience again how he had become and always realized himself again as a priestly person, being a priest and musician,” he wrote.

The second characteristic about his brother that the Pope Emeritus remembered is “his cheerfulness, his humor, and his joy for the good gifts of creation.”

“At the same time, however,”  he wrote, “he was a man of direct speech as he expressed his convictions openly.”

He said that despite living in almost total blindness for more than 20 years, his brother “accepted” his situation and “overcame it inwardly.”

A man of God

As well, the Pope Emeritus reflected that “sobriety and honesty were the true center” of his late brother’s life, adding that “in the end, he was always a man of God.”