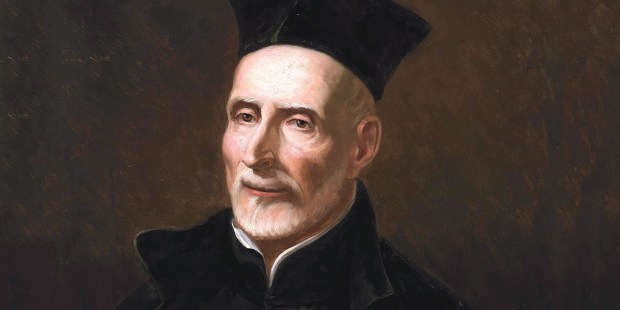 Joseph Calasanz considered education the key to success, and felt that poor kids should also have a chance at it.

When we think of public schools, we think of free schools funded by the state to provide education for all children – the opposite of private schools.

But in fact, public schooling as we know it can be credited not to a government, but to a saint: Joseph Calasanz. Appropriately, this saint was a friend of Galileo (more on that later).

Calasanz opened the first free school in Europe, and his ministry was directed especially to the poor. His inspiration came little by little, as he found God guiding him not only in his prayer, but also in his dreams. He also was inspired by the testimony of a parish priest in Rome. Calasanz was working with a confraternity of priests who prepared children to receive the Sacraments by teaching them the catechism. But in one parish of a poor neighborhood, he found the priest was also teaching the children how to read and write, and how to count.

St. Joseph Calasanz wanted this for the hundreds of poor children around Rome. As his mission became more defined in is heart, he tried to fit it in with the group that was already giving catechesis, or with the Jesuits or with the Dominicans. But eventually he realized this was his own mission and the religious congregation he founded, the Piarists, continue it to this day.

In those first days Father Joseph, through his friend, Father Brendani, was offered two rooms, rent-free.  Father Joseph now began his work. Two other priests joined him, and, only five years after his arrival in Rome, the first free school for poor children was begun.

The curriculum was “piety and letters,” meaning the children were learning mathematics and science. This, too, was a new concept: the mixing of “secular” subjects with religion.

Read more:
This saint defied the rich to establish free schools for the poor. He’s now patron of Catholic schools.

Joseph’s free school for the poor immediately grew to over a thousand students. He and his co-workers moved quickly to establish similar schools in other areas of Italy. They became more disciplined in their approach and petitioned for official status from the Church. In 1622, Pope Gregory XV approved the Order of Poor Clerks Regular of the Mother of God of the Pious Schools, better known as the Piarists. The Piarists were the first order of priests dedicated to primary school education.

As often happens with works of God, various problems arose. There were those who were upset by Calasanz’s vision and those who wanted power.

Those set on opposing his work, and one of the accusations against them was the friendship of Piarist priests with Galileo. (Consider a bit more about Galileo here.)

Father Joseph’s friendship with Galileo was presented as evidence of his wayward beliefs and used as “evidence” to condemn his “unorthodox” curriculum. The ruling class and those in power had feared the rapid growth of the Piarist Order and believed that teaching “poor” children would lead to social unrest.

Because of dissension within the community and persecution without, the Piarists were disbanded in 1646. Saint Joseph Calasanz died on August 25, 1648, at age 90 — before the Piarists were cleared and reestablished in 1656. Their founder was canonized in 1767 and is honored as the patron of Christian schools. His feast is August 25.

In 1997, Pope St. John Paul II marked the fourth centenary of the founding of St. Joseph’s schools with a letter to the superior-general of the Piarists:

“Calasanz’s gifted intuition opened a fertile furrow in society, which other founders and foundresses have continued and deepened,” the pope said, “Joseph Calasanz, wise interpreter of the signs of the times, considered education, given in a ‘brief, simple and effective manner,’ the guarantee of success in the life of students and the leaven of social and ecclesial renewal.”

St. Joseph Calasanz, pray for us and, especially for our teachers and students.

Read more:
Saint-teachers to help us with this crazy difficult return to some sort of school