An amateur artist from Rochester is teaching children about the saints through a series of Catholic illustrations. Frank Wolfs’ Facebook gallery is a testament to his dedication and skills. as each week another Catholic saint is added to the fold, which currently includes St. John the Baptist, St. Francis of Assisi, St. Joan of Arc, and quite a few more.

According to Catholic Courier, Wolfs began drawing in high school and considered taking up art full-time in college, before he ultimately chose to study mechanical engineering. Be that as it may, Wolfs never lost his love of drawing and stayed in practice by drawing a cartoon robot named “Widget,” a character who plays a leading role in his current collection.

When the world pandemic left him with some free time, Wolfs was afforded a chance to indulge his artistic and religious sides. Although illustrations of several saints can be found in his gallery as far back as 2016, he did not start drawing them in earnest until July of 2020. He explained in an interview with Aleteia that he was inspired to return to Catholic art after listening to a Catholic radio program in which a speaker noted the virtue of using God-given gifts to help others.

With this mission in mind, Wolfs started a mailing list that sends black and white illustrations of saints for kids (and adults) to color. In his gallery, Frank Wolfs Art, Wolfs displays each drawing in vivid color, as a template for colorers. He even went so far as to contact parishes in the Diocese of Rochester to offer his fine illustrations to their faith-formation programs. Catholic Courier was so taken with his art that they included Wolfs’ work in their upcoming coloring contest, which children who love to color can still sign up for.

Wolfs was kind enough to speak with Aleteia about his Catholic artistic style and his recent work. which he says he is preparing to publish in an educational picture book.

How did you decide to take up drawing saints?

I decided to take up drawing saints after hearing an interview on Catholic radio where a director of a Catholic movie was talking about how it was a responsibility to use artistic gifts from God to spread his message. I have also been inspired by artists that I see on Instagram who post Catholic art frequently. During the coronavirus, I started sending the black and white linework for my illustrations to our friends’ children as coloring sheets. I had also been trying to get better with my skills at drawing humans, and this was a great opportunity to push myself both artistically and spiritually. The saints are a nice subject matter to work with because there is so much imagery to draw from for inspiration.

Has drawing the saints led you to any insights about your own faith? If so, could you elaborate?

I think it has definitely given me a deeper insight into what it means to be a saint. For each saint, I start by reading a short bio about each one to see which elements I want to emphasize in the illustration. I have been struck by how some of their lives are similar to everyday people! I think it has inspired me to push myself to be a better Catholic. Another thing that has struck me is that even with all of our technology, God is still working miracles that can’t be explained by our scientific understanding.

What does Catholic art mean to you and how do you hope others will view your illustrations?

To me, Catholic art helps to form images of what our faith teaches. It helps to put faces to the names that we often hear in prayers and in parts of the Mass and it helps to further bring our faith to life when you can very clearly visualize things based off artistic renderings. I think that when the art is done well, it moves me and inspires me to live a more holy life. Catholic art made by others has definitely been a motivation for me to make my own.

Through my art, I hope that people see my faith and the thought that went into making these images and that it inspires others. As I am also making these illustrations into coloring sheets, I hope it will inspire young children to want to learn more about their faith and have fun coloring while doing it. I think that if the only impact I make with my art is making coloring sheets that lots of children use and enjoy, it will have helped me give back with the gift God has given.

Who is your favorite saint to draw?

My favorite saint to draw is St. Michael the Archangel. I like that he is a very strong saint and is also a protector. As someone who loves Star Wars, Lord of the Rings, and Marvel, he has the warrior aspect that I find very interesting that very few other saints have. There is just something really fun about drawing a Catholic warrior with a sword!

How do you choose which saint to draw and who are you going to draw next?

My choice of saints to draw comes in two different ways. The first is that I have a link on my emails to let people suggest saints that they would like to see in the future, and I try to regularly pull from them to make my audience feel a part of the process. The second source of inspiration is to flip through illustrated books of saints and see which ones inspire me in the moment. I try to pick saints who look fun to draw and have interesting aspects to portray. I think that the next saint that I am going to be working on is St. Charles Borromeo.

You’ve drawn your cartoon robot character, Widget, in a multitude of situations. Will we ever see Widget interacting with saints?

A cross-over of Widget and the saints sounds like a great idea! I am open to suggestions on how it would look, haha. I would have to think how to portray it to make sure that I don’t take away from the holiness of the saints. One of the professions that I have him inspired by is being a monk who makes Monks Bread at the Abbey of the Genesee! 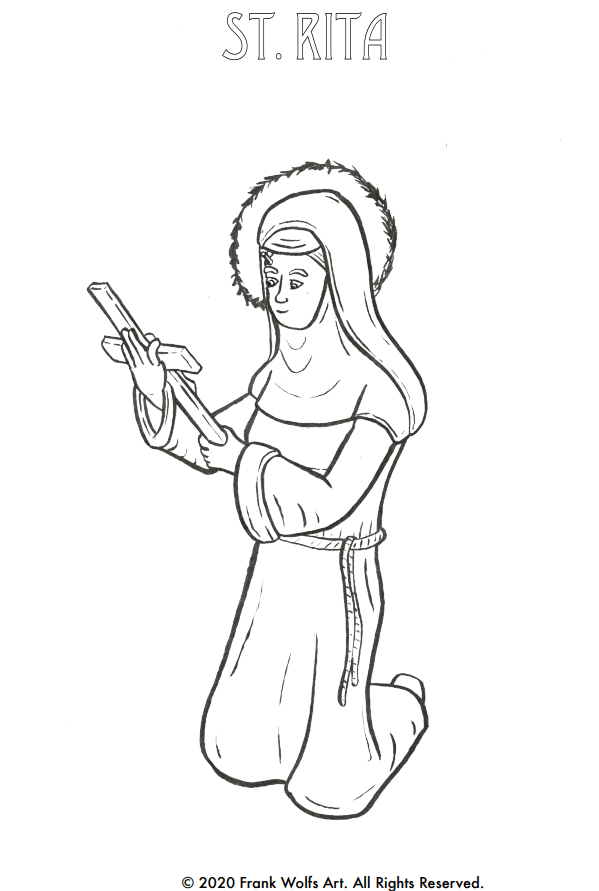