Banksy: Where politics and kitsch meet 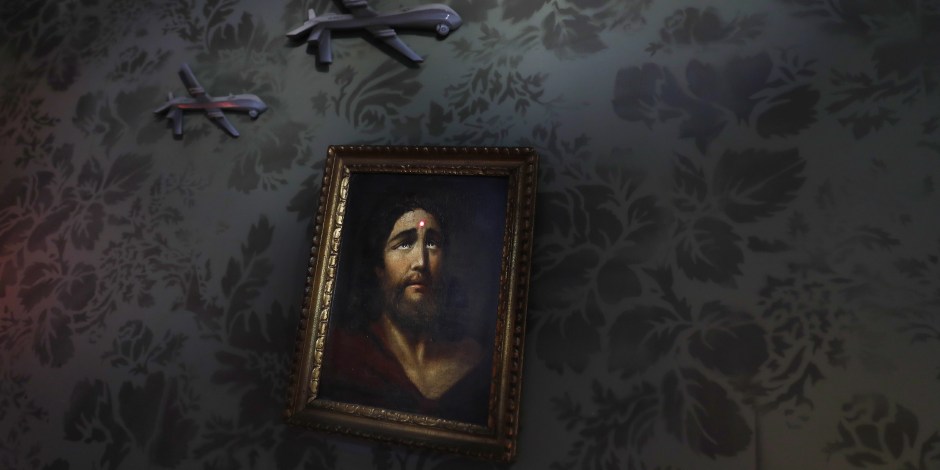 BETHLEHEM, WEST BANK – MARCH 15, 2017: A painting depicting Jesus Christ with a weapon’s laser red dot on his forehead and US military drones is seen in the lobby inside street artist Banksy’s newly opened Walled Off hotel in the West Bank town of Bethlehem. Secretive British street artist Banksy opened a hotel next to Israel’s controversial separation wall in Bethlehem on Friday, his latest artwork in the Palestinian territories.

Banksy is an anonymous British street artist who most likely employs a team, judging by the size of some of his installations. A lot of Banksy’s art is graffiti with a satirical or dark twist: A naked man hanging out of a window while a husband peers out, a refugee child using a lifesaver as a tire-swing.

Banksy has traveled the world for his art. In 2010, he directed a documentary, Exit Through the Gift Shop, which he brought to the Sundance Film Festival. He also installed 10 street artworks in Park City and Salt Lake City in culmination with the screening. In 2015, Banksy was creating art on the Gaza strip.

Banksy describes the Walled Off Hotel as an “open-hearted community resource” which has no political or religious beliefs and caters to Israelis and Palestinians both. Each room is filled with beautiful works. Most of these, like the photo we have today, have some dark twist, or eerie humor that provokes thought in the viewer.

The hotel offers many different styles of rooms, from the economy bunk, complete with personal safe, shared bathroom, and earplugs; to a presidential suite, complete with “with everything a corrupt head of state would need” for a good time: a plunge bath able to accommodate up to four revelers, original artwork, library, home cinema, roof garden, tiki bar and a water feature made from a bullet-riddled water tank.

See the hotel’s FAQ page to explore the Walled Off Hotel further. One popular question:

Are you just making a profit from other people’s misery?

Don’t worry, Banksy won’t see a penny. The artist paid for the installation costs and has now handed it over as an independent local business. The aim is to break even and put any profits back into local projects.

Tags:
ArtIsraelPhoto of the Day
Daily prayer
Aleteia's Top 10
See More
Advertising
Newsletter
Get Aleteia delivered to your inbox. Subscribe here.
Thank you! Your submission has been received!