Did St. Kateri bring a miracle healing not once, but twice, to the same child? 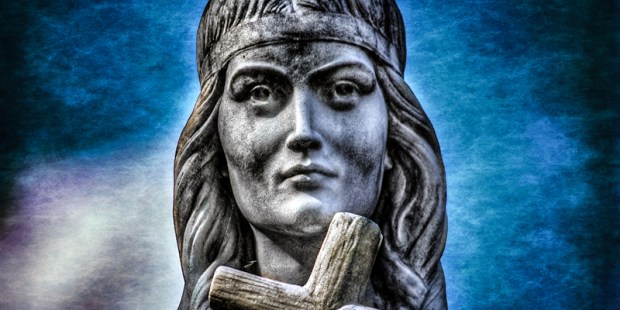 Native American saint is still showing her special favor for one family of devotees.

In 2012, Kateri Tekakwitha became the first Native American to be canonized a saint by the Catholic Church. A miracle attributed to her intercession paved the way for the official recognition of her sainthood. That miracle occurred when a boy dying from an aggressive infection of flesh-eating bacteria was suddenly healed. That boy was Jake Finkbonner. And Saint Kateri is still at work in his life.

“It was the last game of the season, and it was the last minute of the game.” This is how Elsa Finkbonner begins the story of her son Jake’s fateful encounter in 2012 with necrotizing fasciitis, a rare, flesh-eating disease. “I was driving for a lay-in,” Jake continues, “and then I got pushed from behind the back, and I hit my lip on the base of the basketball hoop.”

Two days later, recounts Dr. Craig Rubens, a pediatric infectious disease specialist at the Seattle Children’s Hospital, the bacteria was burning across Jake’s face as if the boy’s skin was nothing more than parchment paper: “You’re stamping it [out] on one side, and it’s flaming up on another.”

Read more:
The miracle that led to the canonization of Fatima’s Jacinta and Francisco

Then, Sister Kateri came for a visit. That’s right, Sister, not Saint, Kateri. Jake’s great-aunt brought a visitor, a nun, to pray at his bedside. “I recall looking at her with a stunned look,” said Elsa. “We had been praying for weeks for Blessed Kateri to intercede and spare Jake’s life, and here was this woman and she had the exact same name.”

“That was the last day that his disease progressed,” Elsa says. Sister Kateri had brought a relic of Blessed Kateri with her to pray for Jake. “I prayed with him and his family, and we placed the relic on his bed,” Sister Kateri said.

Father Tim Sauer, the Finkbonners’ parish priest, says Kateri (the saint) was the perfect intercessor for Jake. “No. 1, we’re talking about two young people,” Sauer explained in an interview with NPR. “No. 2, we’re talking about two people who come from Native American ancestry. And No. 3, we’re talking about a person who herself suffered from a disease that disfigured her face.” Tekakwitha’s face was scarred by smallpox. Legend has it that when she died, her scars vanished.

Saint Kateri Tekakwitha was an Algonquin-Mohawk who converted to Catholicism. Called the “Lily of the Mohawks,” she lived in the Jesuit mission village of Kahnawake, south of Montreal in New France, now Canada, and was baptized at the age of 19, on Easter Sunday, April 18, 1676. Tekakwitha was baptized “Catherine” after St. Catherine of Siena – Kateri was the Mohawk form of the name.

I recently interviewed Jake’s mom, Elsa Finkbonner, who told me how St. Kateri is still interceding for her family. Jake recently received the Sacrament of Confirmation – I’ll keep you in suspense, for now, about which saint he picked as his patron … or patroness.

But here is what Elsa told me:

“It was at this exact time last year,” Elsa begins. “Jake went to Nicaragua and Costa Rica with the Spanish class at his high school.”

Parents and students had agreed to have no contact with each other for the two-week trip, so as to give the kids a full immersion experience.

While Jake was still in Central America, Elsa continues, “one night my husband, Donny, had a dream. Jake came to him saying he needed our help and that he was scared.”

Now any good Catholic family will know that a father’s dreams aren’t to be taken lightly — just think of St. Joseph!

In his dream, Donny asked Jake what was wrong. Jake said that he didn’t know, but to please help him.

The dream was unsettling for the Finkbonners, and their concern grew when they saw a teacher’s Facebook post from the trip: “One kid down,” it said, but offered no further explanation.

Elsa turned to the family’s special intercessor, St. Kateri, praying daily for their beloved saint to “keep watch over him and to bring him home safely to us.”

While anxiously waiting to hear which child was “down,” Jake’s parents were relieved to see a new Facebook post: a picture of Jake smiling and apparently in perfect health. A few days then passed before Elsa and Donny greeted Jake at the airport in Seattle. “We were so excited to see him,” Elsa recounts, “only to see that he was spotted from head to toe.”

Jake’s teacher then revealed to his parents that Jake had indeed been the “one kid down.” Jake had experienced a severe heat stroke in Costa Rica and had passed out. People were working on him from 9pm until 1am, Jake’s mother explains, trying to get him rehydrated. It was about this time that his father was having that unsettling dream.

The coincidence with Jake’s skin again being affected is startling, as well. He was so covered in spots, Elsa explains, that while getting off the plane and going through customs, Jake’s teacher asked him to wear his sweatshirt. Otherwise, Jake may have been suspected of carrying the Zika virus into the country, which was then a major international concern.

“I am certain that Saint Kateri was there for him once again,” Elsa states.

Plans for the future

Just as before, Jake recovered from his health scare and is doing great. He’s getting ready for college and hopes to pursue a degree in medicine. After many, many encounters with plastic surgeons following the flesh-eating bacteria’s devastation to his skin, especially his face, Jake was inspired to become a surgeon and has not wavered from this goal. Please join his family in praying for his goals through the intercession of Saint Kateri!

I left you in suspense earlier. Are you still wondering which saint name Jake picked for his Confirmation?

It was, of course, Saint Kateri!

Saint Kateri Tekakwitha, pray for us!

Read about more recognized miracles attributed to the intercession of the saints:

The miracle in Mexico that confirmed young Jose’s sainthood