4 Inspiring women who are “Doctors of the Church” 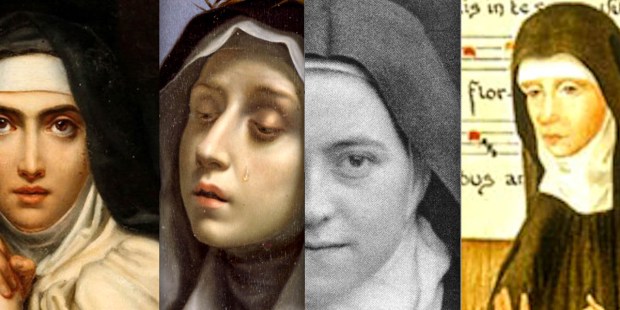 These women stand strong among the most influential saints in the Church’s 2,000-year history.

Beginning in the 13th century, popes began pointing out specific saints who were exemplary teachers in various theological or spiritual topics. These holy men and women were given the official title of “Doctor,” which stems from the Latin root word docere, meaning “to teach.”

The list is relatively small compared to the number of saints in the Church. Only 36 saints have been declared “Doctor,” with four of them being women. These women are considered highly influential figures in the history of the Church and their legacy lives on today in the countless men and women who are inspired by their example and teachings.

Born on March 28, 1515, Teresa was known as a spitfire. She was not satisfied with a mediocre life and was inspired by God to help with the reform of the Carmelite order. Teresa worked with St. John of the Cross (another Doctor of the Church) to reinvigorate the Carmelites and return them to a faithful life of contemplative prayer. Her strenuous work of reform made her the target of persecution from within the Church, which proved to be a great cross for her. She was also a great mystic and her spiritual writings, such as The Interior Castle, continue to provide spiritual sustenance to many.

Caterina Benincasa was born in Siena, Italy, on March 25, 1347. As a young girl Catherine had a vision of Christ seated in glory with Sts. Peter, Paul and John next to him, and it inspired her to make a private vow, dedicating her life to God. When she refused to get married, Catherine’s parents recognized the holiness of their daughter and made a private cell — like the room of a nun — that Catherine could live and pray in. Catherine eventually became a “Third Order” Dominican, leading a life of prayer while being active in the world. She wasn’t afraid of conflict and even traveled to Avignon, France, where Pope Gregory XI was residing and spent three months trying to convince him to return to Rome. Going against his closest advisors, Gregory eventually did go back to Rome and returned the papacy to the Eternal City.

Read more:
Did you know Catherine of Siena was not a nun?

Born on January 2, 1873, Thérèse was a stubborn little girl who experienced a profound conversion in her life at age 13. After that moment Thérèse drew closer to God and felt called to pursue the religious life. At the age of 15 she was convinced that God was calling her to enter a local Carmelite order, but the local superior and bishop would not allow it. Refusing to be dissuaded, Thérèse was so bold as to ask Pope Leo XIII for permission to enter at her young age while on pilgrimage in Rome. Her actions caught the attention of local leadership, who permitted the girl to become a nun at 15. Her life was hidden to the world until her death at age 24, when shortly after her spiritual autobiography, Story of a Soul, became a “bestseller” around the world and inspired countless souls with her signature “little way” of holiness.

Read more:
Therese of Lisieux: Is the Little Flower the most dangerous of saints?

Hildegard was born around 1098 in Germany and experienced mystical visions from an early age. She eventually joined a local Benedictine convent and became their superior. Her life and writings were highly influential. Pope Benedict XVI explained in a letter the many reasons why she was named a “Doctor of the Church.”

[T]he attribution of the title of Doctor of the Universal Church to Hildegard of Bingen has great significance for today’s world and an extraordinary importance for women. In Hildegard are expressed the most noble values of womanhood: hence the presence of women in the Church and in society is also illumined by her presence, both from the perspective of scientific research and that of pastoral activity. Her ability to speak to those who were far from the faith and from the Church make Hildegard a credible witness of the new evangelization.

Read more:
Hildegard of Bingen: A woman who reproached both popes and kings

Read more:
What are Doctors of the Church, and can they fix a broken leg?