The Romans built the Rotunda of St. George to last

Erected in the 4th century, this ancient church still functions.

Nearly hidden way in the heart of Sofia, Bulgaria’s capital city, stands the Rotunda of St. George. Small in stature, this red brick building is considered the oldest in Sofia and it maintains its original function.

Take a look at our slide show to see the beauty of the oldest church in Bulgaria. 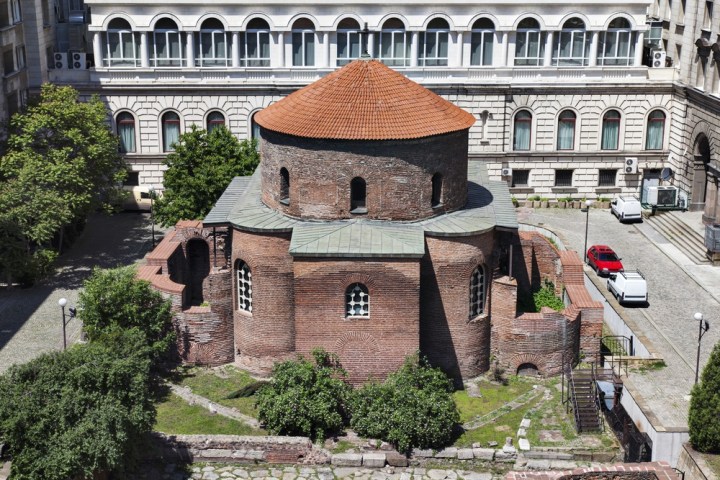 The construction effort was begun in the 4th century, most likely under the orders of Emperor Galerius, who ended the Diocletianic Persecution when he issued an Edict of Toleration in Serdica in 311, or by Constantine the Great, who succeeded Galerius. The Rotunda was the centerpiece in a large complex of ancient buildings of the same style, which is known to be a part of the ancient town of Serdica. The Serdican ruins still surround the Rotunda and can be explored by visitors.

The interior of the church displays its storied history with five layers of frescoes, which were added each time the Rotunda changed hands. Wikipedia describes impressive variety of art adorning the walls:

… the oldest is a Roman-Byzantine with floral motifs from the 4th century; the second in Bulgarian medieval style with angels from the 10th century; the third from the 11th and 12th centuries – a frieze with prophets and frescoes depicting the Ascension, Assumption, etc.; the fourth is from the 14th century with a donor’s portrait of a bishop north of the entrance, and the fifth with Islamic ornamental motifs.

The Islamic motifs come from 16th century, when the Ottomans took control of Sofia. The Rotunda was used as a mosque until the mid-19th century, when Muslims abandoned it and Christians reclaimed it for its original purpose.

In a YouTube video, Curious Pavel
explains that the tall buildings situated around the Rotunda of St. George, the Sheraton Hotel and the government building known as “The Presidency,” were built the during 20th century’s Communist occupation of Bulgaria. The Communists sought to hide the ancient church from sight to deter people from worship. Because of this, the site cannot be seen from the road and can only be reached on foot.
Tags:
ArchitectureArtChristianChurchChurch HistoryEurope
Support Aleteia!