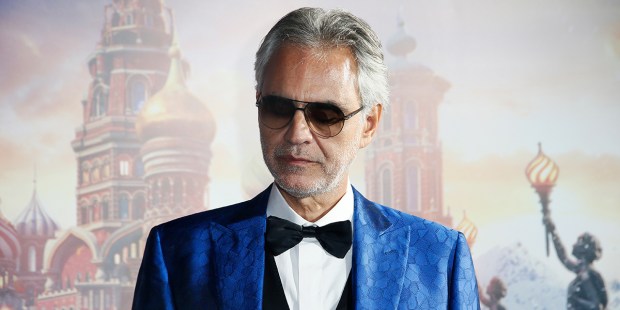 They were diagnosed in March and have since fully recovered.

World renowned tenor Andrea Bocelli announced that he and his family have tested positive for the COVID-19. The singer said that he, his wife, and two children were nearly asymptomatic and have since made a full recovery.

Bocelli, 61, opened up about his experience outside a hospital, where he said he was donating platelets to help further the effort to create a vaccine. Entertainment Tonight reports the esteemed singer noted in a statement that he withheld this information to prevent unnecessary worry from his fans, as well as to respect those with more life-threatening cases. He said:

“We were fortunate enough to have a swift and full recovery by the end of March. Given the chance to donate blood to help find a cure for COVID, my response was an immediate ‘yes.’ A modest — but fundamental — gesture, through which I am playing my small part.”

Bocelli has been a source of comfort for his millions of fans worldwide throughout the coronavirus pandemic, offering encouraging words and performances on his Facebook page. On Easter Sunday, Bocelli performed a live-streamed concert from the Duomo di Milan, titled “Music for Hope.” The half-hour long concert drew 27 million viewers. In the concert’s brief introduction, Bocelli said:

“I believe in the strength of praying together. I believe in the Christian Easter, a universal symbol of rebirth that everyone, whether they are believers or not, truly needs right now.”

Bocelli, who was forced to quit a promising soccer career when he lost his sight, has always been open about his firmly held Catholic Faith. In a 2019 interview with Italian priest Fr. Davide Banzato Bocelli mused that his affliction has become an aspect of his life that brings him closer to God. He said:

“… I think I discovered that chance does not exist,” he told Fr. Banzato. “I believe this to be true because I perceive it. I don’t have tangible proof that this is the case, but there are thousands, thousands of facts, big and small, that convince me of this: what has happened to me, and continues to happen every day, is the fruit of design. [This realization] was the first step towards a complete reconciliation with my faith.”

Andrea has also formed a bond with Pope Francis, for whom Bocelli performed “The Lord’s Prayer” during the papal visit to Philadelphia in 2015. Last September, Bocelli and Francis made a surprise visit to a shelter for families and young people in need, located in the town of Frosinone, in central Italy. In 2018, Bocelli headlined the World Meeting of Families, in Dublin, alongside the talented dancers of Riverdance.