Martyrs of the secrecy of Confession: Would one priest betray another? 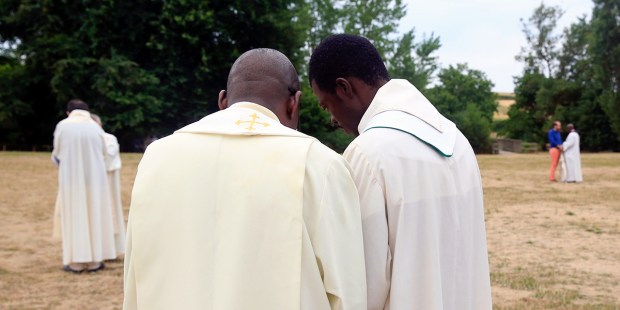 These two martyrs of the Spanish Civil War went to their death defending their priesthood, including the Sacramental Seal.

The Spanish Civil War, which took place from 1936 through 1939, is often called the “dress rehearsal” for World War II. This terrible civil war saw many thousands of lives lost. Among those murdered were almost 7,000 priests and religious who fell victim to the “red terror.” Unfortunately, mentioning such a large number of victims shadows the fact the victimized are all individuals with their own personal stories.

Here is the story of two of them.

Blessed Felipe Ciscar Puig was a parish priest hearing the confession of another priest, a Franciscan named Andres Ivars. It was Father Ivars who inadvertently made Father Puig’s story possible.

Do what you want, but I will not reveal the confession, I would rather die before that.

Father Andres Ivars was born in Spain in 1885. He became a Valencian Franciscan and was ordained a priest in 1909. With his quick mind, he was sent to the Pontifical University of Rome where he studied Church History and Diplomatics. In 1914 he was sent to the Franciscan province of Valencia where he began to do historical research at the Cardinal Cisneros College. An excellent historian, he would eventually publish several books. In 1919 he became vice-director of the school and in 1928, director.

The Spanish Civil War had just begun when, on July 20, 1936, Republican militia came to Cisneros College and set fire to it. Director Ivars was not there at the time. He was at the “Villa Luz” clinic where he was the chaplain. Hearing of what happened, he moved in with some friends and finally decided to move in with some family members in Benissa. On his way there he was recognized and arrested.

Father Felipe Ciscar Puig was a parish priest who studied at the Seminary of Valencia and was ordained a priest in 1888. He served as a pastor in various parishes and was serving as the chaplain for the Augustinian Sisters of Denia when the Spanish Civil War began.

Father Puig began doing his best to fulfill his priestly duties as discreetly as possible. He was ministering to the sick, saying Mass in people’s homes, baptizing babies, hearing confessions, and bringing Viaticum to the dying. But an informant had told the Republican militia about his clandestine efforts. The authorities wanted desperately to find him and end his hidden ministry. They finally captured him leaving a friend’s house and took him to prison. It was the day before they arrested Father Ivars.

When Father Ivars was arrested, he immediately knew what his impending future was, and asked if he could go to confession. The prison commander was willing to oblige. But he also had a “hidden agenda..” He was sure he could get Father Ivar’s confessor to reveal what had been told to him. Father Ivars was brought to Father Puig for his last confession.

After the confession was finished, the prison commander tried to get Father Puig to reveal what Father Ivars had confessed to him. An archdiocesan statement by a witness to the event said the militiamen threatened to kill him if he did not tell them what they wanted to know. The priest replied, “Do what you want, but I will not reveal the confession, I would rather die before that.”

He adamantly refused. The soldiers and the commandant then held a mock trial where he was ordered to tell them Father Ivar’s “secrets.” Father Puig remained steadfast in his refusal to tell them anything. The militiamen and their commandant condemned him to death.

Fathers Felipe Ciscar and Andres Ivars were taken together by car to a location outside a nearby cemetery. They were both summarily shot to death.  Father Puig was 71 and Father Ivars was 51. The date they were martyred was September 8, 1936, the birthday of the Blessed Virgin.

They both died martyrs, with Father Puig’s primary “crime” being his defense of the Seal of Confession.

Father Puig and Father Ivars were both beatified as Martyrs of the Spanish Civil War.

Read more:
Martyrs of the secrecy of Confession: Is my wife being unfaithful?