Martyrs of the secrecy of Confession: His high-profile penitent caught the authorities’ eye 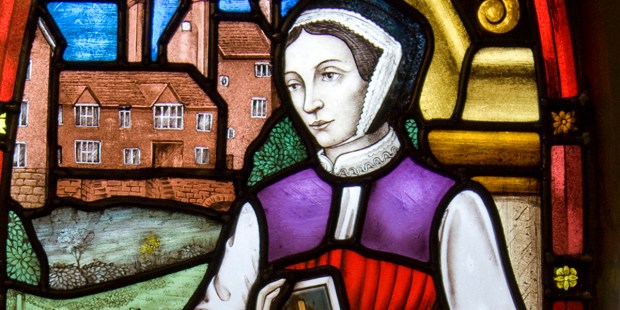 Blessed Richard Thirkeld became the confessor for St. Margaret Clitherow, the wife of an official of the city of York.

Part 4: Martyrs of the secrecy of Confession: Would one priest betray another?

Richard Thirkeld was born sometime around the year 1540. He attended Queen’s College at Oxford and from there studied at Rheims in France. He was ordained a priest on April 18, 1579. After his ordination, he returned to England. King Henry VIII had broken with Rome in 1533 and formed the Church of England. It was now a missionary country, and Father Thirkeld was returning as a missionary.

Father Richard’s mission area was in and around York, where he traveled about as a home missionary visiting Catholics in need of the Sacraments. His ministry was carried out as discreetly as possible. This was the Elizabethan era (1558-1603) and being Catholic in many cases meant execution, especially for the clergy.

Unexpectedly, Father’s ministry caught the ear of a high-profile Catholic, and he became her confessor. She was Margaret Clitherow, who was known as the “Pearl of York.” Her husband was the Chamberlain of the City of York and her father had been the sheriff. Margaret and her husband had three children.

Margaret had converted to Roman Catholicism in 1574. Her husband remained a member of the Church of England, but he supported his wife’s decision, most likely because his own brother was a Catholic priest. Margaret was required to pay fines for not attending establishment church services. Her husband paid them for her.

Once a person had been fined twice, the next penalty for non-attendance was serving time in jail. Her first imprisonment for not attending church was in 1577. Two more incarcerations at York Castle followed, and during her third confinement, her third child was born.

Father Richard was making clandestine visits to the jail, usually in some type of disguise, doing whatever he could to remain anonymous. He would always do his best to visit Lady Margaret. Margaret, who, when not in jail, also did her best to hide priests on her property whenever she could.

Being Margaret Clitherow’s confessor more than likely had moved Father Richard high up on the authorities’ “watch list.” While visiting a Catholic prisoner at one of the jails, he was arrested for being a Catholic priest. It was the feast of the Annunciation in 1583.

Father Richard readily admitted that he was a Catholic priest and spent the next two months in jail waiting to learn of his fate. When they came for him, they caught him hearing a prisoner’s confession. The date was now May 27, 1583. He was brought to court and charged with “hearing confessions and bringing lapsed Catholics back to the Church.” (Hard to imagine such “laws,” but we see certain places today trying their best to pass laws infringing on the Seal of Confession.)

Father Richard was ordered to appear in front of the court the next day for trial. Standing tall for the Catholic priesthood, he appeared in his cassock and biretta. He was quickly found guilty of “hearing confessions and bringing lapsed Catholics back to the Church.” He was sentenced to death the following day.

That night in jail he did his best to minister to the other prisoners, focusing as best he could on those facing execution as he was. Among his last words (as written in documents of the day) to the prisoners were, “Be brave and faithful, then, and let no torments, crosses, or afflictions lead you to fail in courage. Christ, your Captain, will grant you to roam far and wide in His royal palace of delights.”

The next day Father Richard Thirkeld was hanged in secret, as authorities feared that a public execution would have caused a demonstration. He died because he was “hearing confessions.”

Margaret Clitherow was convicted of the crime of “hiding Catholic priests.” She was executed in a horrendous manner on March 25, 1586. She was slowly crushed to death under a pile of rocks. She was canonized a saint by Pope Paul VI on October 25, 1970.

We ask both Blessed Richard Thirkeld and St. Margaret Clitherow to pray for us all.

Read more:
California bill that would violate seal of confession withdrawn from consideration

Read more:
Martyrs of the secrecy of Confession: Would one priest betray another?

Read more:
Martyrs of the secrecy of Confession: Is my wife being unfaithful?